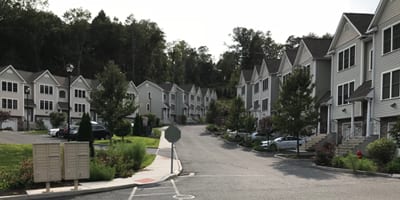 from the sewer service. Those in a defined sewer district are assessed for the construction of the cost to build that line. In Brookfield there are four remaining Districts described under the Projects tab above.

The payment of the loan has a defined term with a known average interest rate. In the case of the Three Condo Project the loan term is 20 years at 2% interest. Thus the assessment is due is divided in equal 20 year increments with interest assessed at 2% of the unpaid balance. Below is a calculator for you to determine the principal and interest on your property.

(1) In the case of the Three Condo project for Whisconier Village, Cedarbrook and Stony Hill Condos, the total project amount is $5,571,000.  The net project amount is reduced due to a Clean Waters Fund grant by the State of Connecticut of over $1.2 million. Note: With the additional properties on this line in 2021, the assessments for historical properties were reduced beginning with the June 2022 billing. The calculation method on future interest has changed. The caculator is correct for years 2022 and beyond.

(2) The Grand List Value of a property is determined by the Brookfield Tax Assessor. It is set as 70% of the fair market value of the property. In the case of the Three Condo District this includes the value of each property eligible to be on the sewer, including Whiconier School and industrial properties along Vale Road.

(3) Generally the loan or bonds to fund the project have a fixed term and defined average interest rate. In the case of the  Del Mar Drive Area Projects, the term is 20-years at an interest rate of 3%. Thus the assessments are due over a term of 20 years, with an assessed interest of 3% on the unpaid balance.

This data was captured at https://www.fhfa.gov/Default.aspx?Page=87 under
All-Transactions Indexes (Estimated using Sales Prices and Appraisal Data) at
States through 20xxQ# (Not Seasonally Adjusted) [TXT] (But this is now changed as of 2014)

Data is now captured from https://www.fhfa.gov/DataTools/Downloads/Pages/House-Price-Index-Datasets.aspx. See the link under Quarterly Data -> ​U.S. and Census Divisions (Seasonally Adjusted and Unadjusted) -> [TXT] Scroll down to CT data.

(5) A property owner can elect to prepay the entire Benefit Assessment.  That will avoid future bills and interest payments. However, if too many properties do that, there will not be the income flow to pay the loan. In that case, the funds may come either from (a) additional properties connecting or (2) State Statues allow for a supplemental assessment to assure the bonds are paid. That has never occurred in Brookfield.

(6) As additional properties come on a district, the potential exists to lower the amount that the original properties are assessed. However, a property that has pre-paid is not eligible for a rebate.

(7) Capital Recovery Fee in Districts with a bond paid off: Where does the money go?

By State Statue (Sec. 7-267) the funds may be used as seed money to begin new projects or as a reserve against needed capital improvements on the existing system.  In this regard, the funds may be used for planning and design as well as construction. While some within the existing system may argue that the excess monies belong to them, it must be recognized that the initial planning which put the system in place was probably paid for by the town in general. Further, judicious expansion of the sewer system can result in some economy of scale via reduced user charges, as well as a general improvement in the quality of life and favorable improvements to the tax base. *

* Quote from Methods of Capital Cost Recovery on Water Pollution Control Projects, A Summay and Analysis of the 1995 Sewer Benefit Assessment Survey, January 1997. A Document by the State of Connecticut Department of Environmental Protection.