A State study of pollution is underway at the request of the Federal Government. It turns out that Brookfield boarders the two biggest lakes in Connecticut—Candlewood Lake and Lake Lillinonah. Like many water bodies in America, both lakes suffer from severe algae blooms in the summer.

The Chairman of the WPCA is working with the State studying non-point sources of Phosphorus entering water bodies in CT. More is on-line at https://www.ct.gov/deep/phosphorus

The motivation for the Brookfield WPCA being involved is to be sure the problem of pollution is properly understood so that any solution is cost effective. For example, it could be that asking the waste treatment plants to reduce the phosporous as a point source of pollution will be costly, but not solve the problem.

Some Facts and Findings:

1) Algae grows out of hand when there is excess nutrients for the organisms to feed on.

2) The two offending nutrients are Nitrogen and Phosphorus. But since algae can fix nitrogen from the air, a deficiency of nitrogen in the water is not limiting their growth. So it makes no sense to reduce nitrogen. The consensus of the scientific community is that phosphorus is the limiting nutrient.

3) In the past the government has required publicly owned waste treatment plants to reduce nitrogen discharges because they can. Nitrogen mitigation no all that costly. Phosphorus removal is much more expensive. It is more difficult to deal with non-point sources of phosphorus, which can be significant sources of lake nutrients.

The Story in Pictures:

Brookfield WPCA has partnered with the Candlewood Lake Authority to capture satellite photos of the lakes using imaging technology by Blue Water Satellite. The pictures show the lake on two clear days: (Click on the date to see weather data for the month.) 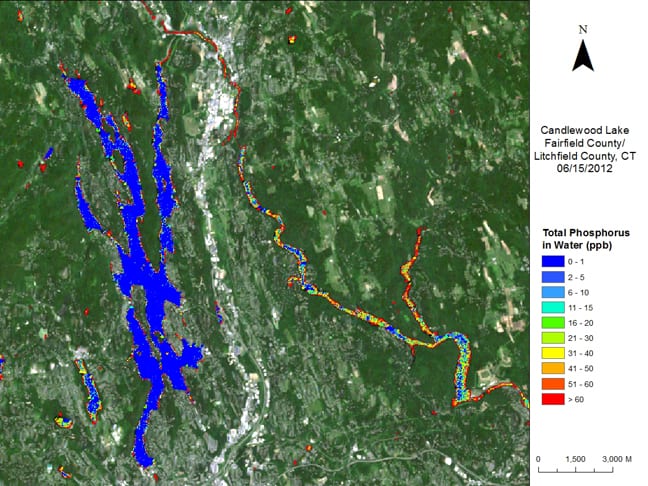 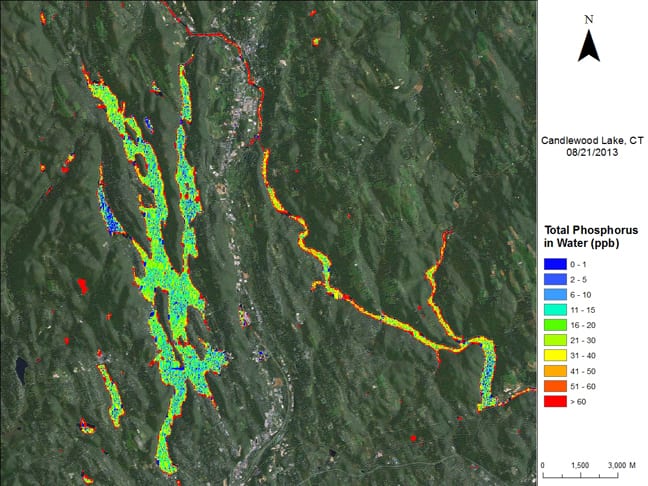 * Satellite data has been captured since the mid-90’s for a full spectrum of wavelengths. Blue Water Satellite can do an analysis from satellite data only for days when the flyover happened at a time when there was no cloud cover. The analysis of phosphorus, chlorophyll and phycocyanin is taken from filtering to specific wavelengths characteristic of each compound.