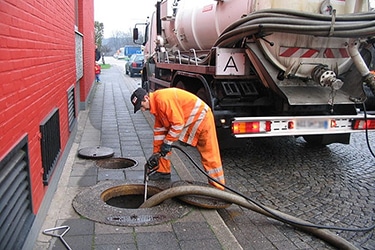 There is a rigorous schedule of inspection of the entire sewer works nearly every weekday. Pump stations are visited and continuously electronically monitored 24/7/365—a standard practice among WPCA enterprises across Connecticut. This is done to be sure there is not a problem that may cause an environmental, health or safety issue.

In addition, each property with a commercial kitchen connected to the sewer system, must be equipped with a 1000 gallon or larger tank to serve as a trap for FOG—Fat, Oil and Grease. This is a standard technique to prevent grease from fouling or even blocking the sewer arteries.  The grease is trapped at the top of the water level and must be pumped out according to an established schedule depending on the history of grease loading. There is a regular inspection of these traps, mostly associated with restaurants. Beginning 2020 there is a fee for grease trap inspections of $80 per year for active grease traps—$40 for each semi-annual use bill. An annual report is provided to the owner on the condition of the grease trap.

Some commercial establishments have pump stations that need to lift wastewater to the sewer line. Each private pump station is inspected annually that it is not clogged and that it functions properly. There is a $80 annual fee for this service, billed $40 semi-annually. If anything needs attention the owner is made aware immediately. Otherwise, the owner gets an annual report when the bills are issued.

Oops! Did Krispy Kreme doughnuts clog the sewer? Those delicious warm glazed beauties are being blamed for clogging more than just arteries, an Associated Press report details. The Virginia county has turned to the courts.

AP reports: “Fairfax County says the company has damaged its sewer system by dumping yeast and grease from a plant in Lorton. Officials filed a lawsuit this month after the company refused to pay a $1.9 million bill for repairs to the system.”

The Washington Examiner adds that the lawsuit says the damage was caused by “excessive quantities of highly corrosive wastes, doughnut grease and other pollutants.”

It gets worse, according to the lawsuit that was filed the “clogged pipes resulted in raw sewage leaks that shut down the southern Fairfax sewer system.” The county officials say its workers once ran a closed-circuit camera inside a pipe to show the grease deposits, but the camera got stuck in the goop.