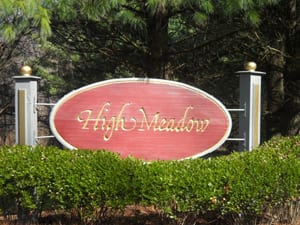 A) Motivation for the Project: The three condo complexes had failing or challenged septic systems as evidenced by high water table, rocky soil and the requirement to pump the septic tanks frequently. Typically, the septic systems are expensive to refurbish or rebuild. They cannot be built to today’s standards for performance and code-compliant reserve areas. Connecting with the municipal sewer system is a permanent solution.

Faced with the potential of expensive repairs that are typically not guaranteed, the High Meadow Condo Association initiated discussions with the WPCA to sewer their area. The WPCA subsequently met with neighbor associations, Ledgewood and Newbury Crossing, suggesting a coordinated project.

The septic situation is further exacerbated with the installation of Town water. Ground water from the septic systems are no longer being drawn for domestic use, so it had nowhere to go except to make the wetlands wetter. This puts an additional hydraulic challenge to the area septic systems.

B) Routing Options: In the initial stages of the project several routes were considered.

1) Gather the waste streams and pump out to Silvermine Road. This option required a new pumping station and an upgrade to the so-called Railroad pump station on Silvermine Road. This was the best option, since costs for requirements to traverse wetlands were high making the cost on parity with Option 2 below.

2) Gather the waste streams and pump under the Railroad to Pocono Road in the vicinity of the Fire Station. This is required a temporary disturbance of wetlands and a wetlands permit. It also required a rather expensive easement requested by the Railroad. But it was potentially the lowest cost option. However, with the project designed and bid, the costs are about equal to Option 1 above.

3) Gather the waste streams and pump to Route 133. This required a long run of new pipe on Route 133 and under the trestle painted bridge. This was the apparent highest cost option.

C) Wetlands: With the focus on the Routing Option 2, the engineer was initiated. Most of the engineering needed to be completed to develop a complete Wetlands application. That was accomplished. The Wetlands Commission processed the application from December 2012 with approval granted May 2013.

D) Approvals: Projects of this nature require approval from the Board of Selectman and the Planning Commission to start a project. Subsequently, the Selectman and the Board of Finance must approve financing by bonds. Since this project exceeded $1MM, approval by Town Referendum is required by the Town Charter.  All these approvals were secured with the final piece of a town-wide approval completed May 2013.

E) Engineering: The engineering findings were a bit of a surprise. Drawings from the 70’s era project are scarce, so an exhaustive look was taken. It was found

1) The Ledgewood project had rudimentary distribution system, so connections needed to be organized from each building rather than from collection tanks.

2) The Newbury Crossing system was well worn with age. The manhole casings and covers are severely deteriorated and need to be rebuilt.

F) Cost Estimating: With borings taken sufficient to complete a more thorough analysis, it was possible to generate a more accurate cost estimate at a higher confidence level. This gave a preliminary look at the likely Benefit Assessment rate. However, the full cost of working in the wetlands was still in question.

G) Bidding the Project: With Wetlands Commission approval required conditions were finally known in May 2013. The wetlands portion of the project went out for competitive bid in June. The costs were far higher than projected. The WPCA took the option to reject all bids at the regular August 2013 WPCA meeting. The work went forward has been to prepare bid packages for the lowest cost option—a route out to Silvermine Road. The bid package was issued May 2014 and awarded in June.

H) Construction: The easiest part of the project was to do the actual construction, which started in August 2014. Project construction was completed before the end of 2014, then touch up work the first half of 2015.

Jan 2014: Present engineering details for the modified route to the Inland Wetlands Commission.

Aug – June 2015: Construction was underway. Work started from the lowest point in High Meadow upward to Ledgewood. Sewers were activated as the project proceeded and septic systems were decommissioned.